There are two main islands called Ko Surin Nua and Koh Surin Tai, and they are the largest in the Surin group. This Archipelago is much quieter than the Similan Islands as it is a little off the beaten track for most tourists. This is nice as that is the whole purpose of a Liveaboard Trip, to get away from all the tourists. And you will find that Surin is not only home to local Moken Sea Gypsies, but also to a great range of wildlife. For example, on the islands itself, it is possible to see; Flying Foxes and Grey Bellied Squirrels. In addition to Mouse Deer, crab eating Macaques and white bellied Sea Eagles.

The Surin Islands have a large population of Hawksbill Turtles, which use the local beaches to lay their eggs. Additionally, at certain times of the year, False Killer Whales and Pilot Whales can be seen breaking the surface. Sailfish are also another common sight here, seen occasionally jumping spectacularly close to the boats.

What you can expect to see here?

The dive sites around these waters consist of sloping reefs and submerged pinnacles; all covered in a huge variety of soft and hard pristine corals. There are stunning coral bommies, which are home to many smaller marine creatures, including many species of Nudibranch, Cowries, Filter feeding crabs, Seahorses, various species of Pipefish and there is an overabundance of Featherstars. Furthermore, many of the species here are exclusive to Surin.

Giant Yellow Edged, Undulated and White Eyed are just a few of the Moray Eel family which can be stumbled upon. The well camouflaged Frogfish (aka Anglerfish) are around too, though quite elusive and at times difficult to find. There is a huge variety of scorpion fish here too, such as Common Spot Fin Lionfish, the Raggy, and Bearded Scorpion fish and of course the Reef Stonefish. Divers need to be cautious where they put their hands.

Bluefin trevallies, looking for their next meal pursue large schools of glass fish without mercy. Blue Spotted Stingrays and the much larger Feather Tail Stingray can be seen lazing on the sandy areas. The bizarre Garden Eels are a favorite among divers as they sway in the gentle current.

You can find three species of sharks

Several species of barracuda hunt here too, such as the Great, Pick-handle and Yellowtail Barracuda stalking prey make for an impressive site. Black and White Tip Reef Sharks are frequently seen here as well as the odd Grey Reef shark.  Snappers, Sweet-lips, Emperors, Groupers and of course the Dotty-backs also make Surin their home.

The Surin Islands have some of the best dive sites in The Andaman Sea. Not only could you be diving with Mantas and Whale Sharks, but there is also an amazing number of critters and macro stuff to be found ... 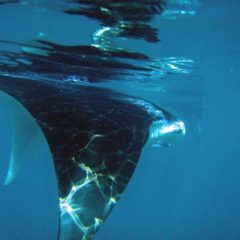 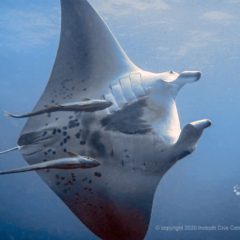 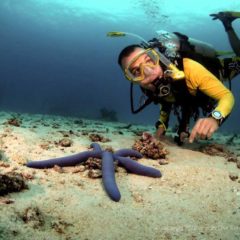 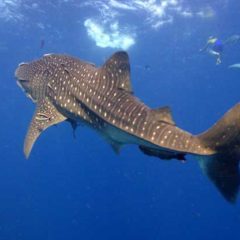