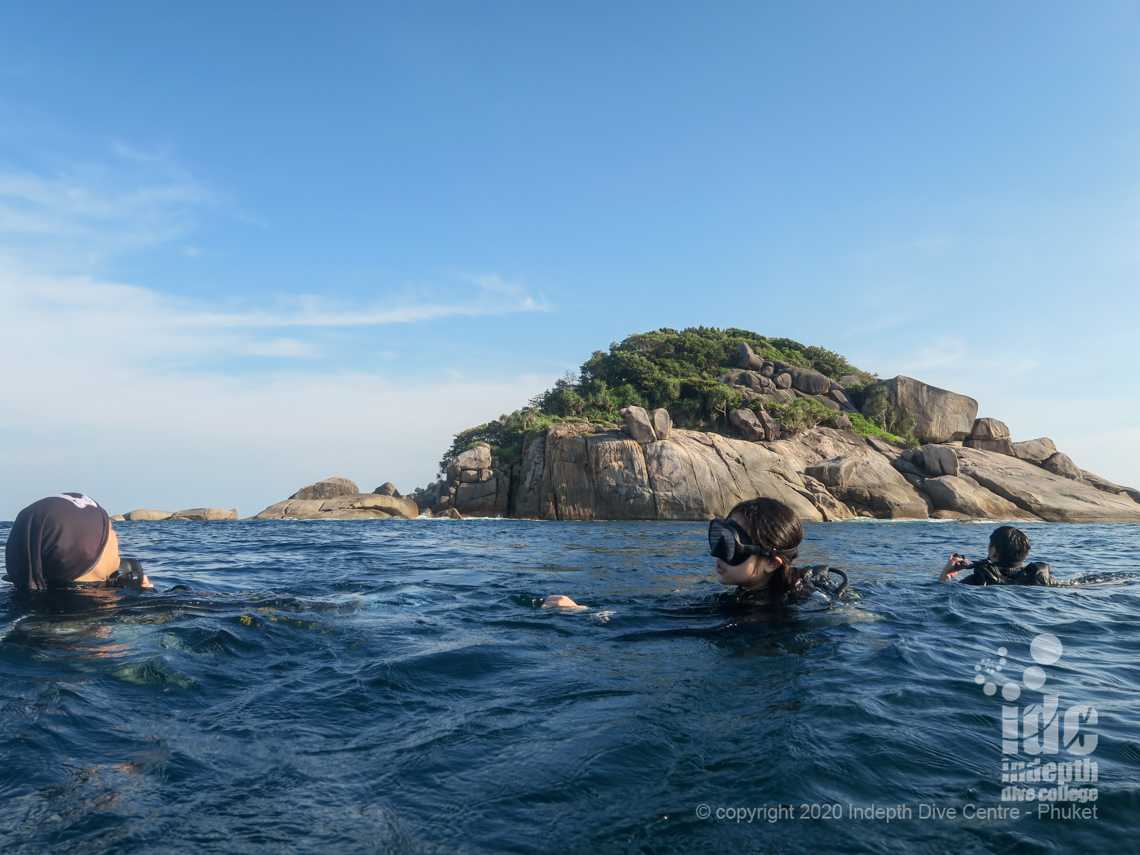 Similan Island No. 7:  West of Eden

Located on the Western side of Island No. 7 (Northern end) and just West of the famous and popular East of Eden scuba diving dive site. West of Eden is less crowded but still has just as much coral and marine life. In fact, it is regarded by many as the best dive spot on the West side of The Similans Islands. Depths range from 10-30m with good visibility and it is a great dive for all levels.

The dive site consists of large granite boulders, as do all the dive sites on the Western side of the Similans. These rock formations also create nice canyons with walls covered with colourful soft corals and giant Sea Fans. The shallow area is a fringing reef and because of this is home to many reef fish. The stacked granite boulders covered with hard corals, soft corals, Gorgonians and also Feather Stars and the like. In addition, it’s a great place to see Ribbon Eels, Frogfish, Ghost Pipefish, Seamoths and many other colourful critters. The most North part has a large field of Table Corals which in turn lead to the site of Deep Six. If you would like to get back into Dive Mode before your Liveaboard you can always dive Phuket on one of our Phuket Scuba Diving Day trips.

This is a favorite site for local guides because it has both types of Similan sites in one place ...

How can I best dive West of Eden in The Similans?

The normal entry point at West of Eden is approximately 300m from the Northern Western tip of the island. The current runs from South to North almost without exception irrespective of what the Tide Tables may say. At the time of writing there is a very small mooring line. Although meant for speedboats, you can easily use this as a reference line.

When being dropped in from a Liveaboard Dive Boat, you normally make a free descent into water between 15-20m.

At the start of the dive there are smaller boulders in a large field of hard corals. There is a rare cross section here, including Table Corals, Staghorn Coral and Brain Corals. You can expect to see all the marine life you expect in the Andaman Sea. This includes Angel Fish, Butterfly fish, Box Fish, Anemone Fish, Trumpet Fish, Sweetlips, Surgeon Fish and also Puffer Fish. Not to mention the various Trigger Fish, Lion Fish, Scorpion Fish, Banner Fish and Moorish Idols. There is also a very good chance of spotting the Clown Trigger Fish, always a great photo opportunity.

Heading North on West of Eden

Heading North at a depth of around 15m you will soon reach a very large granite boulder. This drops off to around 25m. You can head around the rock either way, but if you take the shallower route at 15m, you will reach a channel. Head down the channel to a depth of around 22m and here in the channel you can often spot the colourful Peacock Mantis Shrimp. There are also some large Tiger Cowries. Continue heading North to the second very large boulder, and there is a wall with large Sea Fans. In the sand here, you will find many species of gobies including the Red Fire Goby and Black Dart Goby. Garden Eels can be found in the sandy areas and if you look into the cracks in the boulders. You can normally find the Janns (cleaner) Pipefish, Multibar Pipefish and on occasion, an Ornate Ghost Pipefish.

Continuing North you will reach the third very large granite boulder. In the sandy areas here, there are some very large Barrel Sponges and many Whip Corals. And if you follow the boulder West out into the deeper water, there are some more large Sea Fans. Make sure you remember to keep an eye out for Ornate Ghost Pipe Fish and also Long Nosed Hawkfish who like to chill in the Sea Fans.

At a depth of around 28m there are normally at least two Ribbon Eels. And around 30m you can expect to see the very colourful Purple Fire Goby. However, be careful as this large boulder continues to a depth of around 40m.

Can we see Lobsters on any Similan Day Dives?

If you head across the top of the third large granite boulder there are smaller boulders with many species of hard and soft corals. Have fun looking under the boulders for Spiny Lobsters as this is one of the few sites you can see a Lobster during a day dive. Frogfish can also be seen on this dive site but they are very hard to spot. While in the midwater there are Barracuda, Trevallies, Fusiliers and Tuna, plus some Batfish to be found.

The most beautiful areas of this dive site cover a fairly limited area, so take it slowly and enjoy the beautiful rock formations and coral.

After the third large rock, there are again smaller boulders and large fields of hard coral. Additionally, after perhaps 40m, there is a fourth and final very large boulder which drops off to a depth of 50m+. At the end of the dive keep an eye out for turtles in the shallower water. When ending the dive remember to swim away from the rocks during your safety stop to avoid a long surface swim back to the boat. 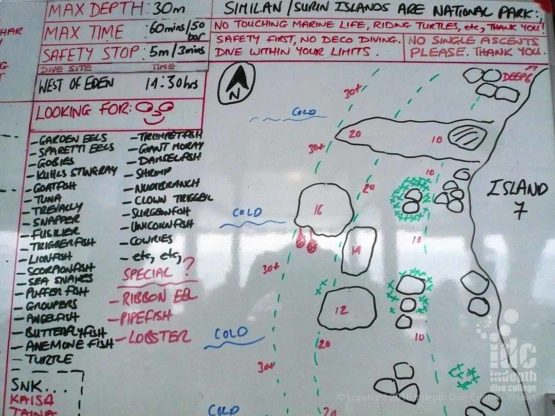 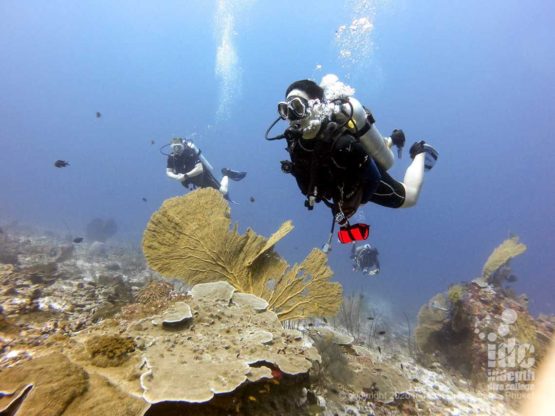 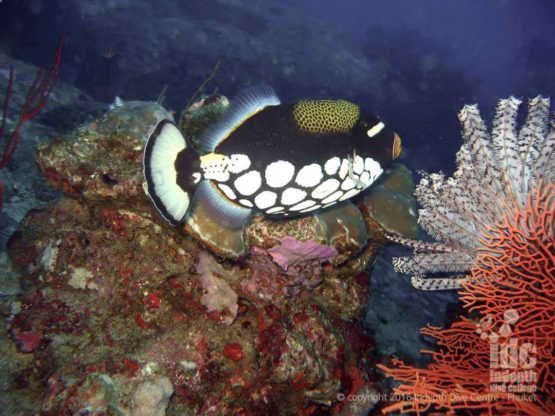 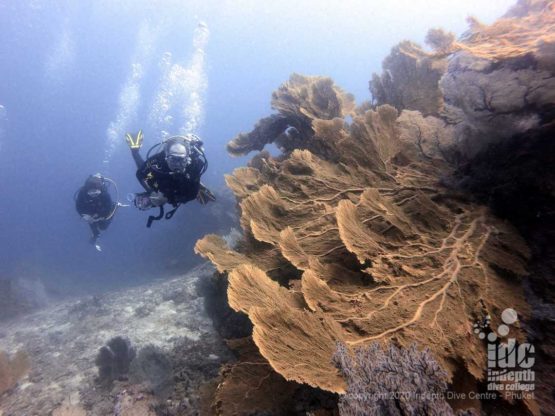 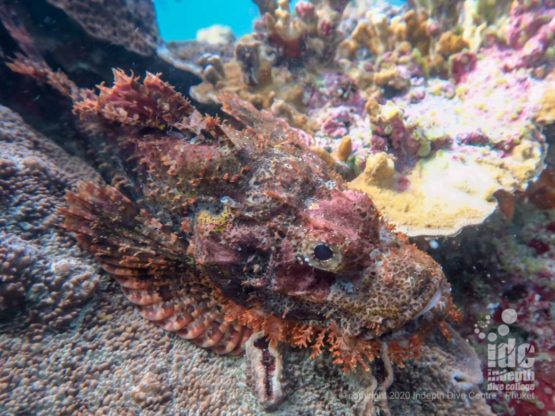 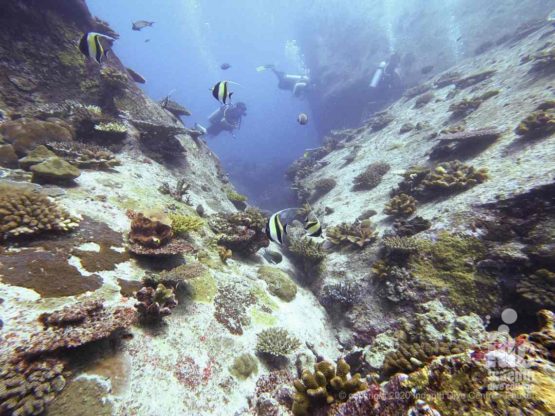 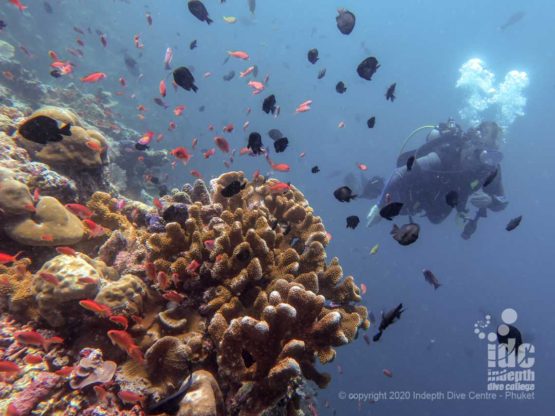 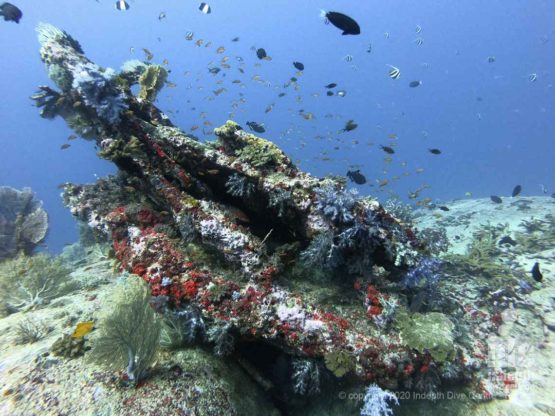 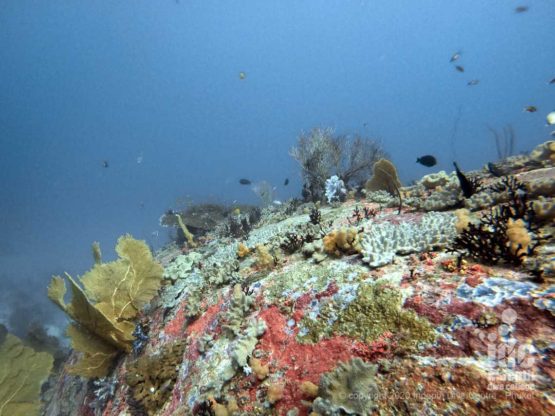 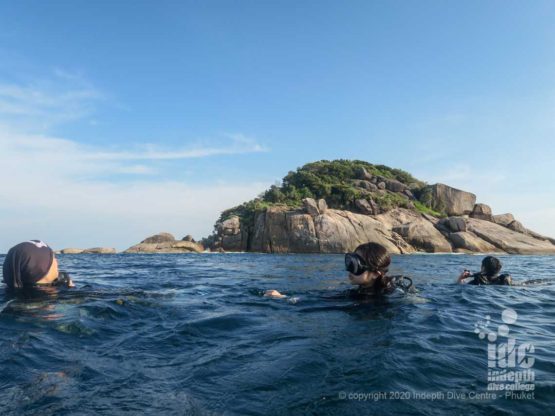 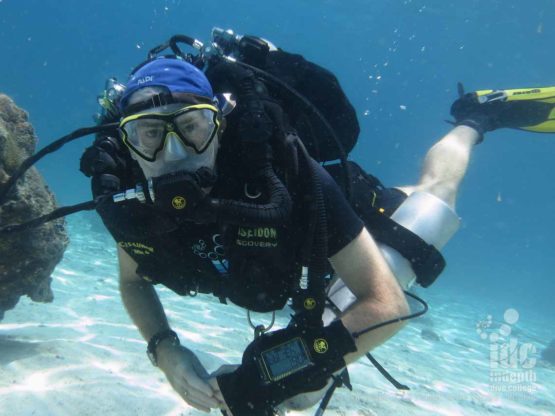