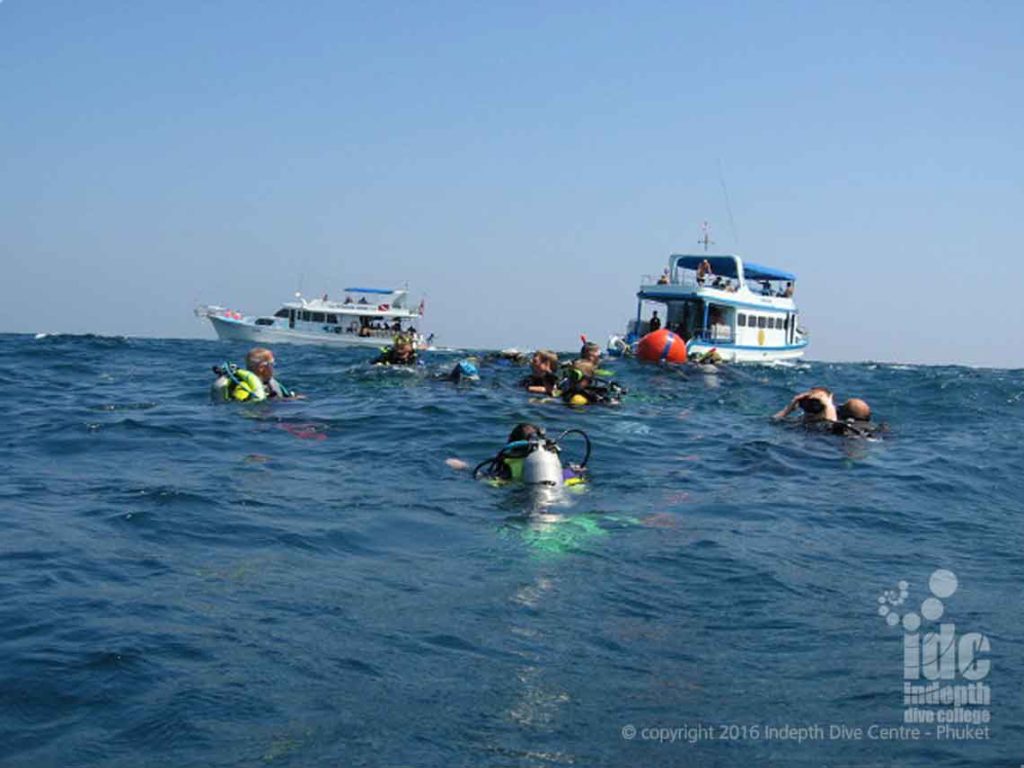 Scuba Diving in the Phuket Low Season / Green Season can be as good as “High Season” with great viz, less boats and in turn less divers. However you need to understand what we actually mean by Phuket Low Season and High Season. In fact some people even call the Phuket Low Season “The Monsoon Season” which conjures all kinds of inaccurate ideas. Usually from movies set in India. After all we are open all year and we happily dive the whole year round!

Phuket Low Season diving: What is a Monsoon? 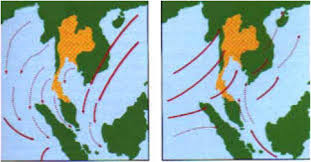 To understand the seasons in Thailand visitors need to understand these two opposing weather patterns . For most people when they hear the word monsoon they automatically think about rain. This is actually not really the case. Thailand’s two seasons, the “Phuket High Season” and the “Phuket Low Season” are actually just two opposing monsoons: The Southwest and Northeast Monsoons.”

It is these weather patterns which affect the Phuket scuba diving as well as Similan and Surin Liveaboard trips, as they affect the available dive sites when the seasons change.

With Phuket being located in the Andaman Ocean on Thailand’s West coast, The Northeast Monsoon is actually the Phuket High Season. And lasts from October until May. This is generally understood to be the best time of year for both traveling and scuba diving as the weather tends to be predictable. This mean hot, dry and very hot and very dry. Another reason this is a popular time is that it’s winter in Europe, Australia and the USA. Which means we have lots of visitors coming to escape the cold climate back home.

Thus the Southwest monsoon, or the Phuket Low Season  / Green Season starts in May. This causes waves and wind to come from across the Indian Ocean. Apparently this is a combination of “Ekman Pumping“. This is the theoretical state of circulation if water currents are driven only by the transfer of momentum by the wind. This and the local alongshore winds which contribute to turbulent currents to the west of the Bay of Bengal as they tend to move Southward. This draws the fresh water run-off from mainland rivers from the top the Bay of Bengal all the way to the coast of India. This in turn causes a drop in salinity of the ocean and cooler diving temperatures.

During the Phuket High season the wind is blowing from the Northeast so the West coast of Thailand tends to be flat and calm and any waves or surf break against the east coast. This is perfect for Phuket’s beach resorts that are congregated on the West coast. This also opens up the opportunity to do dives off the beach. Phuket beach diving can be very popular as it gives the option of a half day dive trip. Kata Beach House Reef is a popular choice. And of course night diving from the beach is also available during these months. A very popular choice for those taking their PADI Advanced Course while on holiday to Phuket.

Many of the dive professionals who dive Phuket all year round comment that the water is warmer and visibility better during the Northeastern monsoon. Aka The Phuket High Season. This is because from winter to summer (March to May) the East India Coastal Current is at its strongest in a northerly direction. It changes direction twice a year. While the regional wind brings the cold and dry air from the anticyclone in mainland China. This affects the majority of the Thailand and is at its weakest during this part of year. Consequently that the surface water of Andaman Sea is warmer and more saline. As there is a lack of runoff fresh water from rivers.

During the beginning of Northeast monsoon, around December, the wind can be strong at times reaching 15-25 knots. This is why the Gulf of Thailand experiences fairly high waves. Thus quite often the boats won’t to Koh Samui or Koh Tao due to the height of the waves. Because Phuket is on the other side of the peninsular, the land protects us from most wind. Thus only certain dive sites are effected and difficult to get to at this time. This can be in either December or January. Apart from the early high winds, the weather pattern in the Phuket High Season is very consistent and very predictable.

Generally it’s breezy in the morning dying down around lunchtime. Thus, the morning may be choppy, but the afternoons are windless and smooth. As a result the boat captains know what to expect and rarely do we need weather reports or weather satellite updates to determine where we will be diving. It’s pretty much the same every day. We can plan our dives and travel times according to the tides to avoid the swells. As well as get to a nice anchorage to enjoy ourselves scuba diving.

During the Southwest monsoon the weather is not so predictable. Rain is more common which is great for agriculture, making the country-side more green and tropical. Hence the name Phuket “Green Season” as it really can be spectacular. However, we can’t accurately predict the weather more than a few days in advance and this makes it difficult to plan longer trips. Also The Similan Islands which are well away from the mainland become inaccessible. Thailand Liveaboards only run when they can safely and accurately predict the weather, which means October until April. In addition to The Similans Marine Pack being closed.

The Gulf of Thailand, home to Koh Tao & Koh Samui is protected for the most part from westerly winds and experiences flatter seas than Phuket does. However, it rains there just as much as it rains on the Andaman Coast during that time. Because Phuket faces the West, the waves batter the popular West Coast beaches directly. This makes the tourist beaches more like a surfers paradise than the usual idyllic postcard settings Phuket is famous for. There are not too many nice beaches on Phuket’s East Coast, so people have trouble finding nice swimming beaches. Phi Phi has nice swimming beaches on both West and East coasts, making it a popular place to stay all year round.

Compared to most other places in the world that are above or below 20º from the Equator, the weather here is not harsh. We rarely get typhoons or hurricanes or even tropical depressions. Besides the constant heat here, we have some of the best, safest and most predictable weather in the world. During the Northwest monsoon, people rarely get seasick on boats.

To start with, if your diving in Phuket we have 3 diving destinations to choose from; the Phuket dive sites of the Racha Islands  to the South of Phuket. Phi Phi dive sites to the East and Phang Na province dive sites half way to the Phi Phi island. The trick for diving here is having protection from the waves. Unfortunately, the Phang Na dive sites such as Shark Point, Anemone Reef and the King Cruiser Wreck do not have protection from rough weather as we are diving at pinnacles that are offshore and away from large islands. So no matter the season, if the weather is rough, your in for a bumpy day. Fortunately, we rarely have very rough seas and can get back to protected areas quickly when necessary. For the year 2017 diving was only cancelled for 1 day due to bad weather and high waves.

Typically when diving Racha Yai the dive boats will always try to dive Racha Yai Bay 1, on the East coast. Usually because of the ship wrecks. During the Phuket Low season when the wind and waves come from the West, it’s pretty much guaranteed we will diving Racha Yai Bays 1 – 3. In the Phuket High Season, when the East Coast dive sites are unavailable the dive boats will head into either Bungalow Bay or Siam Bay. Similarly when diving Racha Noi the preferred sites would be Banana Bay and Banana Rock on the East side of Racha Noi.  We like to dive these dive sites whenever possible.  However during the Phuket High Season the alternate dive sites are Camera Bay and Marina Bay on the West side.

Phi Phi is a little different as the two best dive sites here; Bida Nok and Bida Nai are actually quite small. The dive boat will simply drop the divers on whichever side of the island in the lee of the wind. Phi Phi Ley however is definitely seasonal. High Season tends to be Viking Cave or the shipwreck just offshore of Viking Cave. Phuket Low season you would expect to dive the aptly named Turtle Rock and/or Palong Wall.

Since the distances to the world class Similan dive sites, Surin dive sites and Burma dive sites are much further away, we normally do Liveaboard trips to these destinations. Therefore, to plan trips we need to be reasonably sure that the diving will be good when we get there. And that there are safe and comfortable anchorages for the customers on board. Another consideration is getting divers on and off the boat safely and comfortably. If the waves are too large, the dive platform can be a dangerous place when you’re trying to re-board the boat.

The Koh Similan Island group is large enough so that if there are waves, we can get shelter behind the islands. Usually on the East Coast since the diving is only from October until May. And since the Similans are almost 40 nautical miles from shore, visibility is never effected by rain run off . This mean the viz is usually a MINIMUM of 20m.